November 11, 2012
The hardest thing to do for me, at times, is to consider the price of silk.  It is so very expensive!!!  I usually can't wrap my mind around purchasing it.  There are several sources out there that offer silk and about a year ago I purchased around 2 lbs of natural silk to dye.  A brave move for me considering the price!  Eeek!  I knew I had a pattern and I knew what colors I wanted......now to make the next step and get the project started!  I selected four hanks to be dyed and Chris and I got busy dying them in a variegated blue and a variegated green keeping them monochromatic since I was going to be using an echo weave pattern. 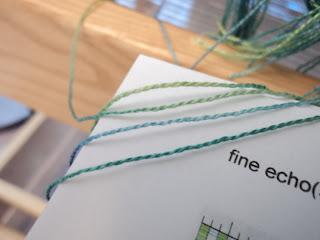 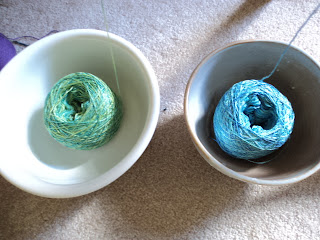 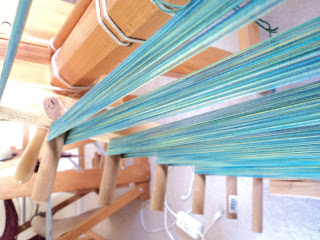 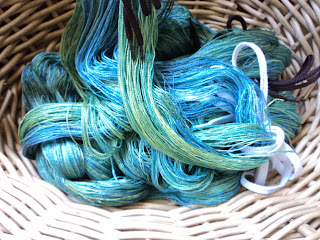 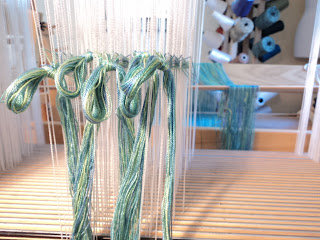 Once the ends were counted out, the loom was dressed and I was happily weaving.  I wove two with a solid black weft......the weft was not dyed here in the studio, it was commercially dyed. 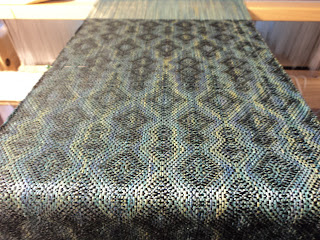 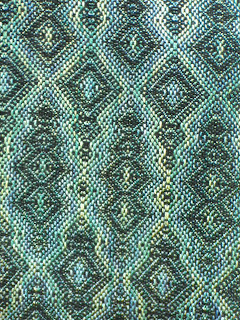 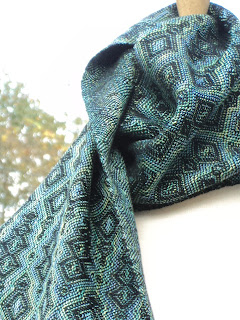 The best part about this project was that I had finished twisting fringe on the scarf with a black solid weft in diamonds, pictured below, at a farmer's market.  Since it was fresh off the loom, I had no intentions of selling it that day......it hadn't been washed or pressed!  My friend Lynn insisted that I put this new marvel on the mannequin to display for all to see.  The moment the sun hit this scarf and the colors popped, one of the ladies at the market grabbed it and threw it around her neck.  It was stunning on her!  AND she insisted that she purchase it!  I was hesitant since it hadn't been washed and pressed.  She insisted!  Ok!  No problem!  SOLD!   Hooray!!! 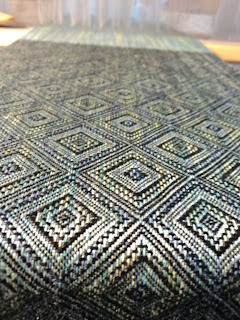 I had also repeated the two patterns with a cream weft for a more subtle look.  They certainly aren't as dramatic as the black weft but a calm soothing pattern. 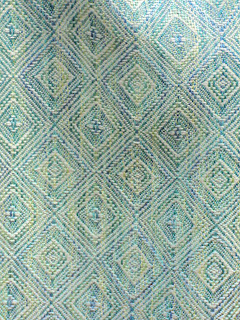 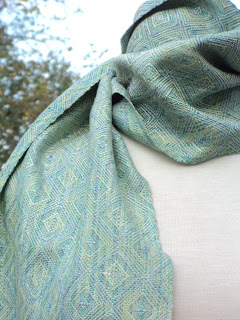 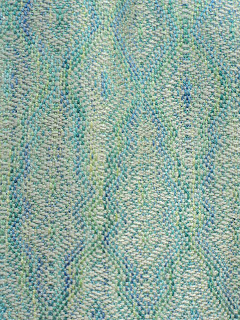 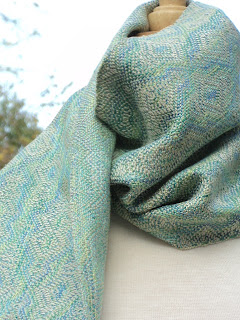 The next run up was a simple time filler.  A solid black warp in a straight draw to I could 'play' with patterning.  First was a simple scarf in blue. 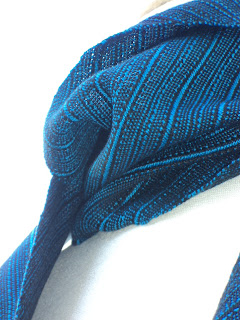 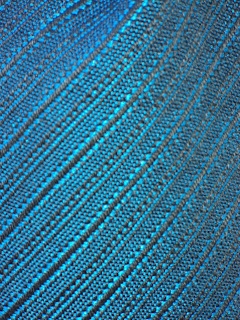 Though the next scarf didn't exactly come out as planned, I was having fun playing with the different possibilities of designing with a straight draw. 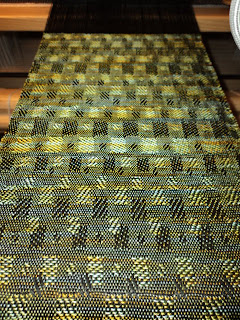 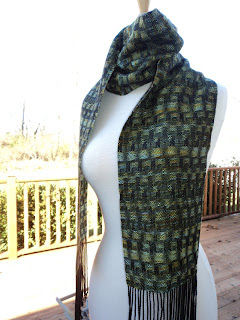 Of course I had to play with broken twill!  The hot pink was a pretty good selection for a scarf that just screams! 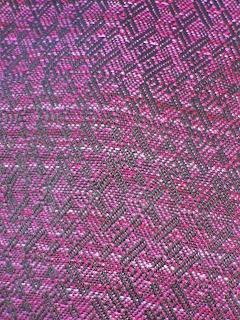 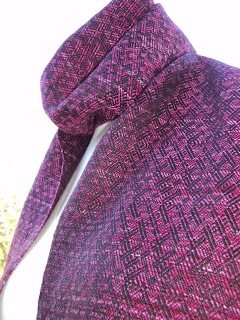 Most of the yarn I have the studio out is displayed out in the open.  There is one cone of a sparkle copper filament that Jeremiah, my fabulous 6 year old is obsessed with!  He has been quite insistent that I weave a scarf for my cousin using this particular sparkly yarn.   Back to the simple pattern so that the diagonal lines so  up just enough to be seen.  The pictures didn't turn out all that great but, she was happy with it! :) 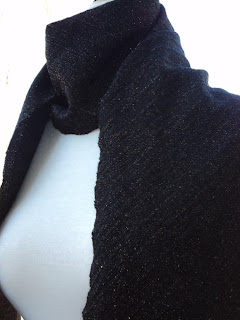 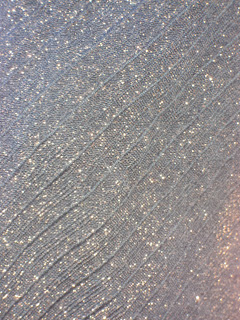 Thanks for this wonderful pictures.

Linda said…
I am so NOT surprised that someone snatched that fabulous scarf up right away. It almost looks like snakeskin. Such a gorgeous draft and colors. I do also like the muted version as well...just a completely different look. Your work is so beautiful!
November 11, 2012 at 5:19 PM

lilquiz said…
I so glad you took the plunge into silk! It is my favorite fiber! It knits wonderfully, crochets wonderfully and really rocks in embroidery. And NOW lookie here, it knocks your weaving designs out of the ballpark! Such a stunning fiber that takes dye beautifully and yes yes yes!(si,si,si!!) Worth the price for the raw material and finished garment. Big love and hugs to you Shannon!! -Nanette
November 17, 2012 at 7:55 PM

Ellen Turner said…
What a wonderful scarf you made in that echo weave! I would have felt tempted to buy that promptly too :-) Or the soft toned blue one, that would look so smart with a denim jacket.
I am impressed with your dying of the silk!
March 3, 2013 at 1:59 PM

Ellen Turner said…
I am very impressed with your duing of the silk, and not at all surprised that that scarf was snatched off right away. I think I might have dived straight for the softer toned blue one, it would look so well with denim clothes.
March 3, 2013 at 2:02 PM