Bring On The Color....Even In The Fringe! 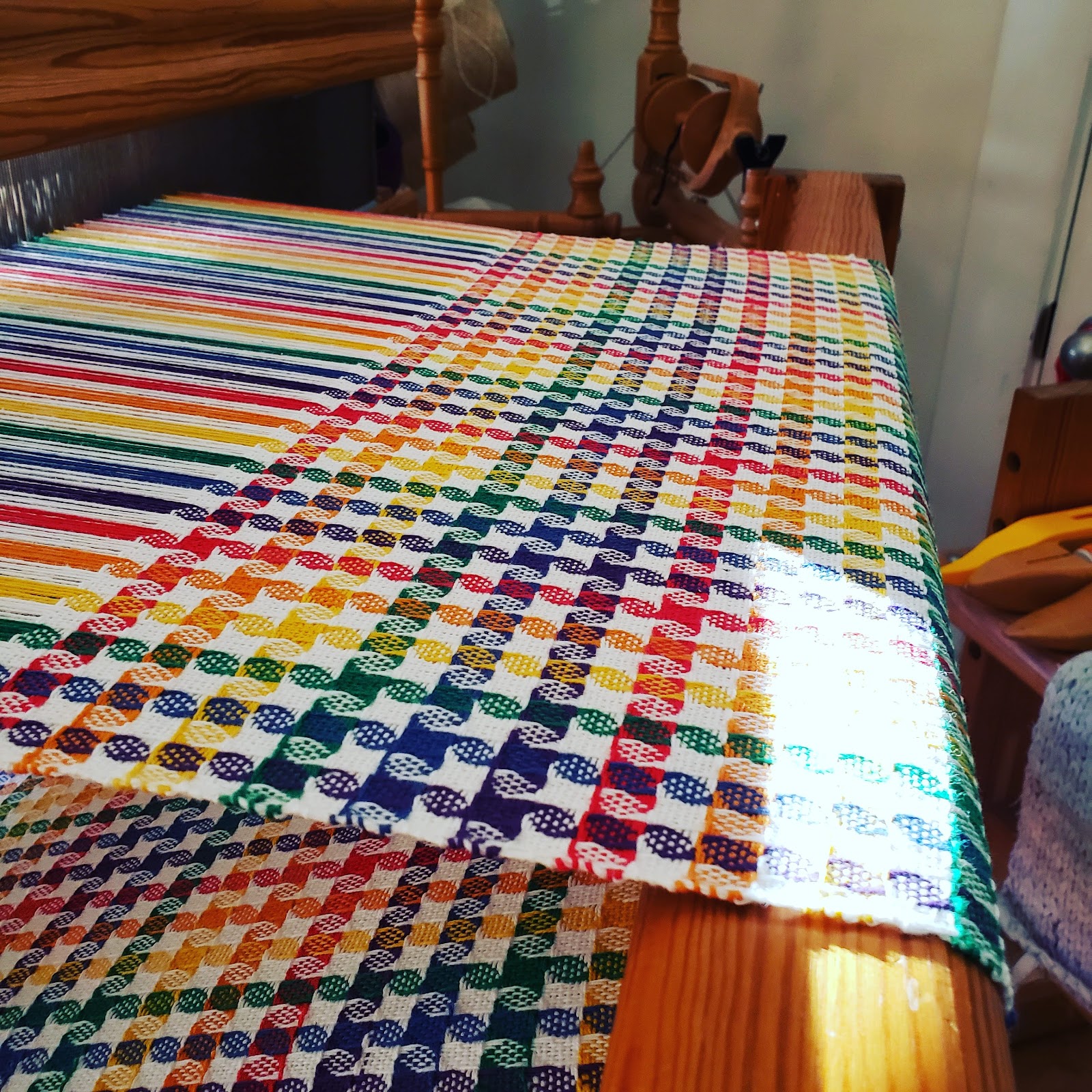 I love the way the colors interact with each other and this pattern and color combination is quite mesmerizing to weave.  When I had placed the order for more colors since I was nearly out, the black was back ordered, so I’ll get to those when it comes in...if I have any of the other colors left.  Towels have been a hot commodity! 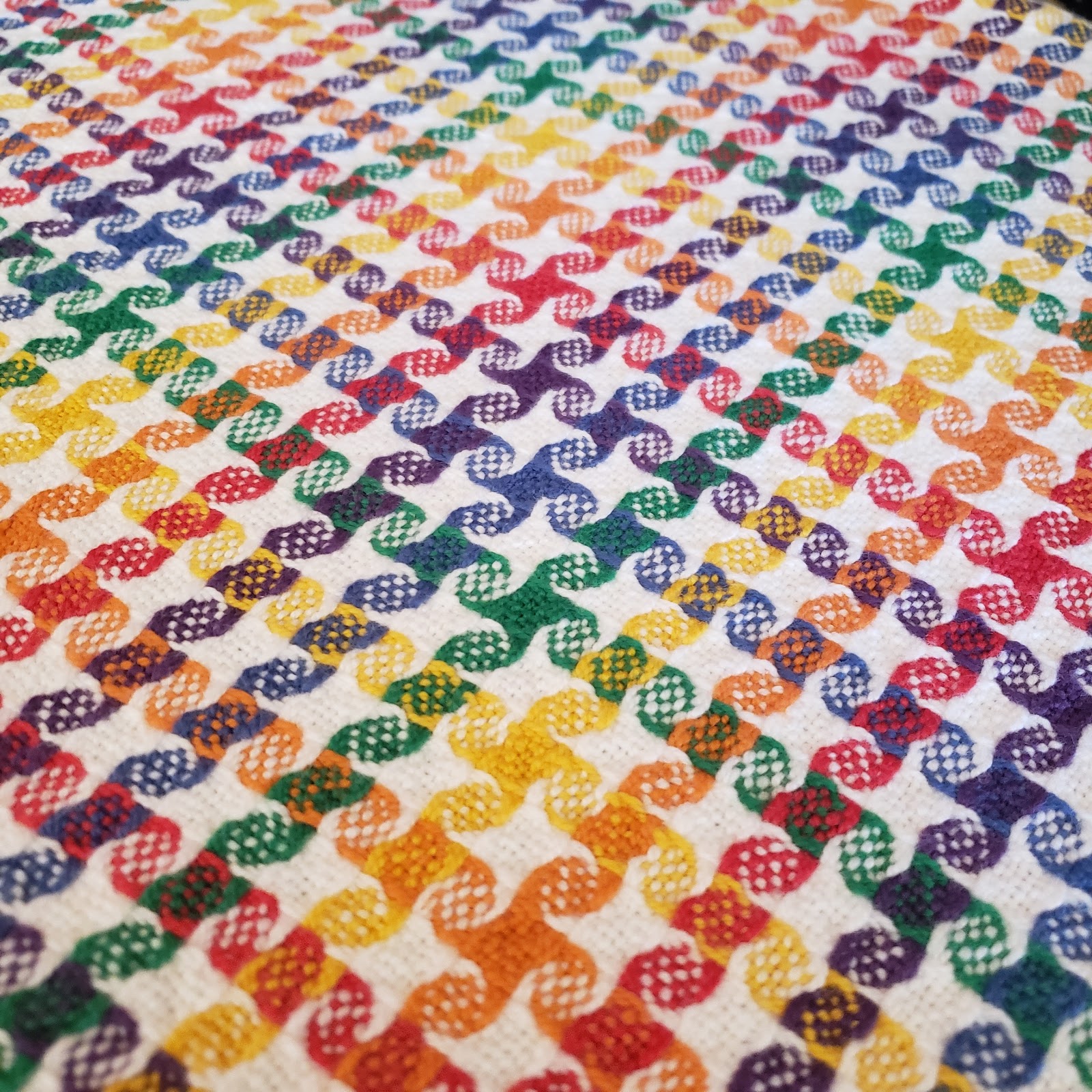 Another hot seller was a run of red, orange, and yellow sunburst towels.  I wound a warp only 8 yards long because I had used some of the main color, orange, in the rainbow pinwheel towels.  I knew that I would run short and would have to improvise with another color but sometimes that’s half the fun! 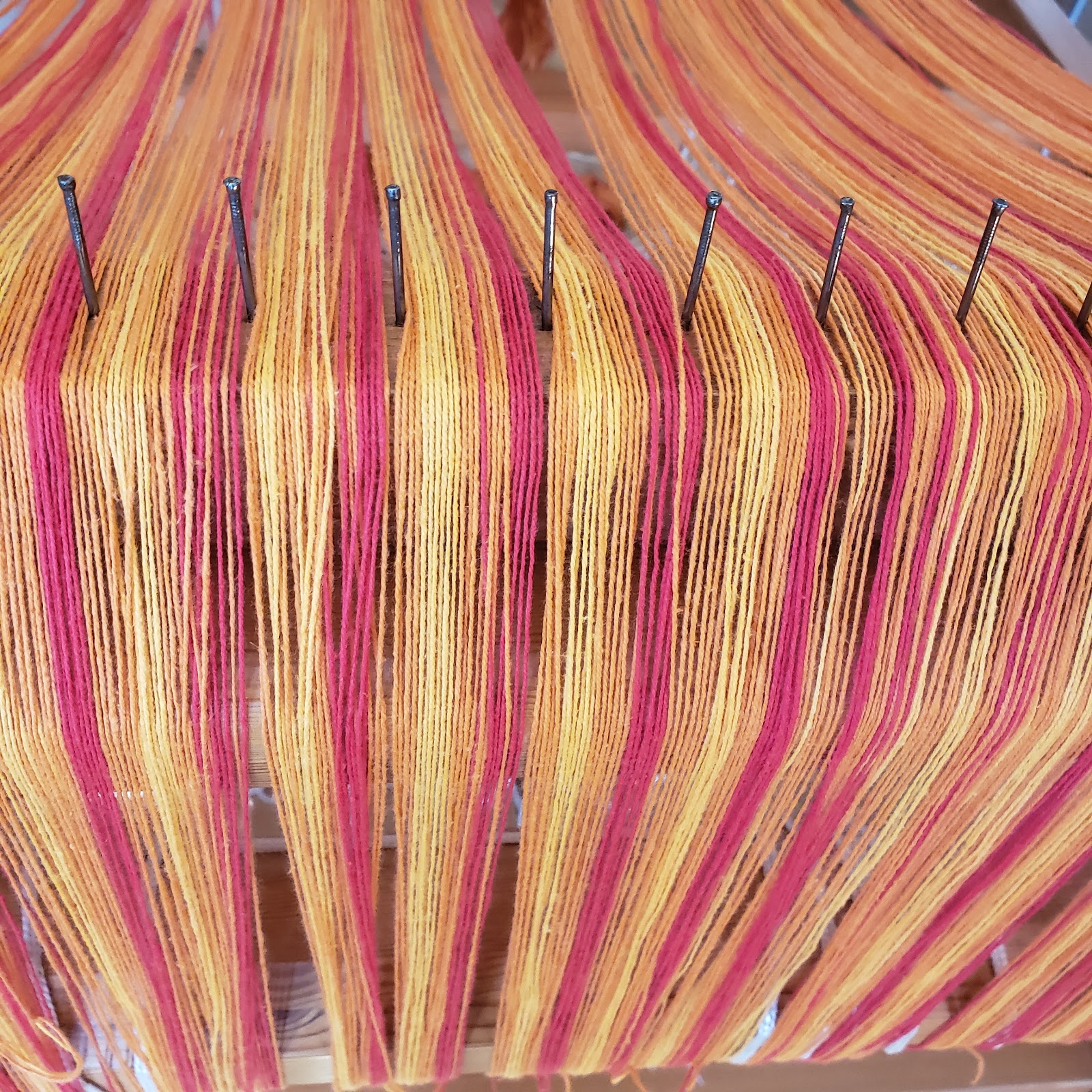 I love the color pop that the sunburst towels give of the yellow in the middle or rather school bus yellow.  I had also found that people really seem to enjoy reds and yellows in a kitchen.  It adds a nice pop of color to just about any background. 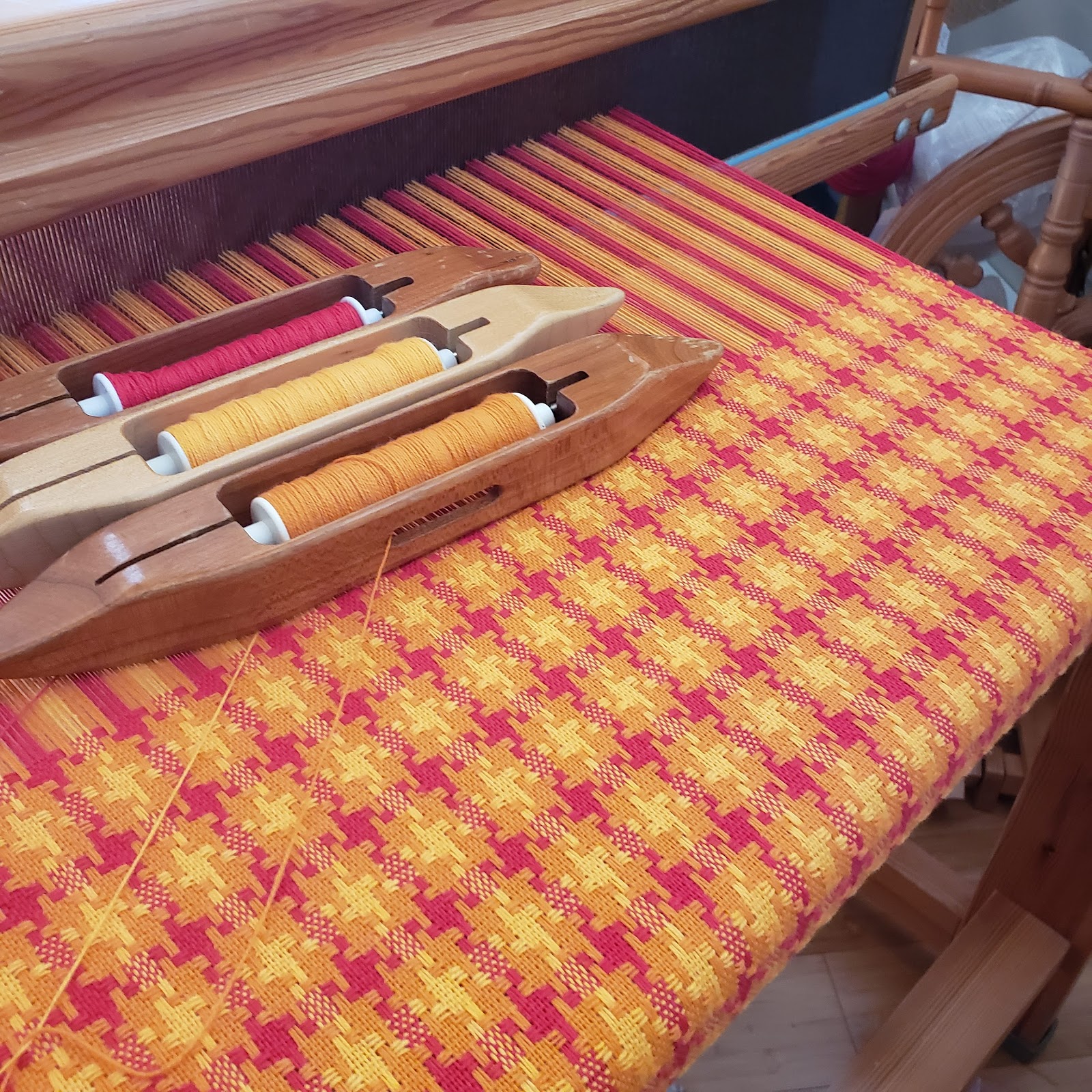 Since I ran short on the main color orange, I chose to go with a burnt orange in the weft in its place.  The results, I felt worked out just fine.  I think I may call this one Fire Ants on Parade. The contrast is nice and it still falls in the same warm color combination. 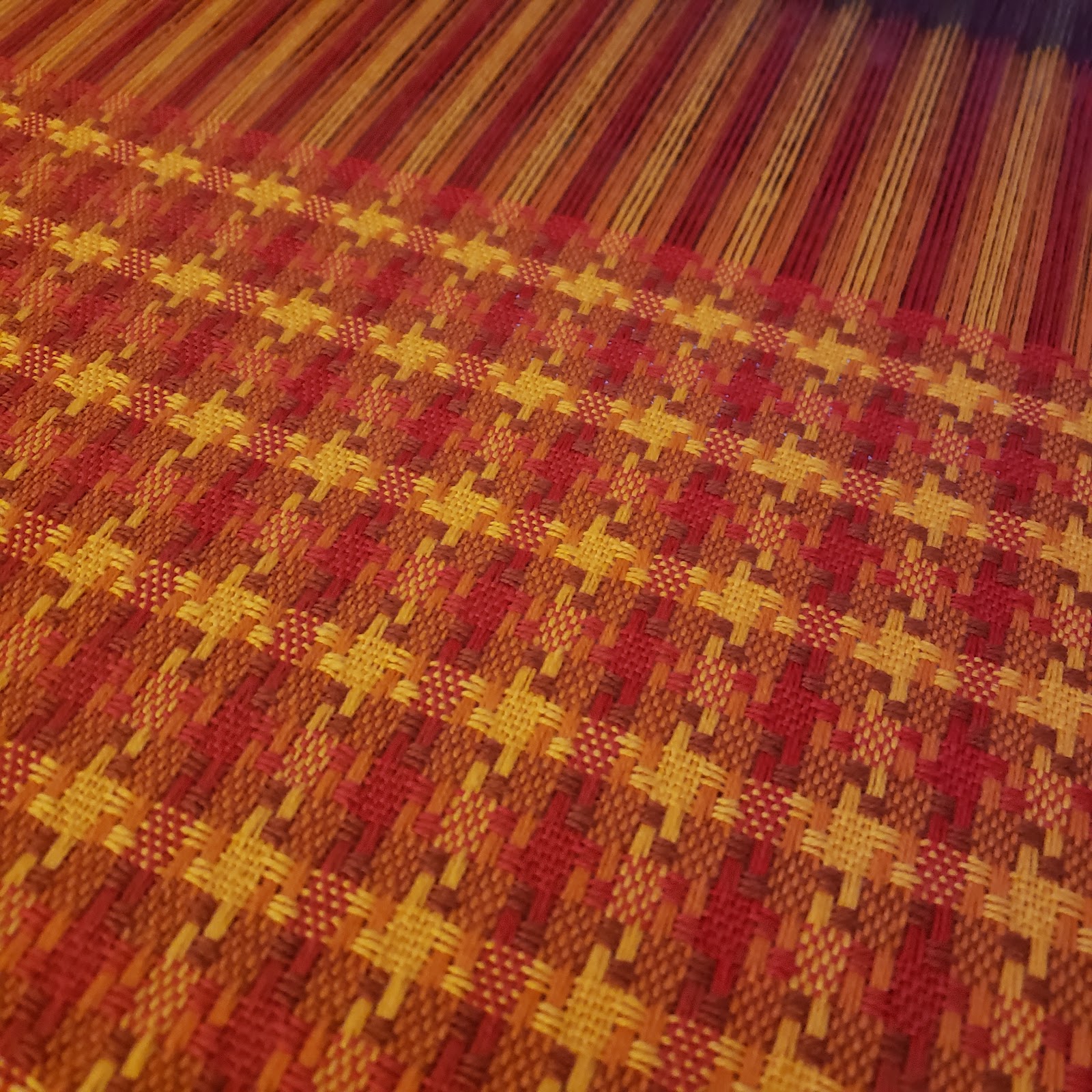 All rolled up and ready to be hemmed! 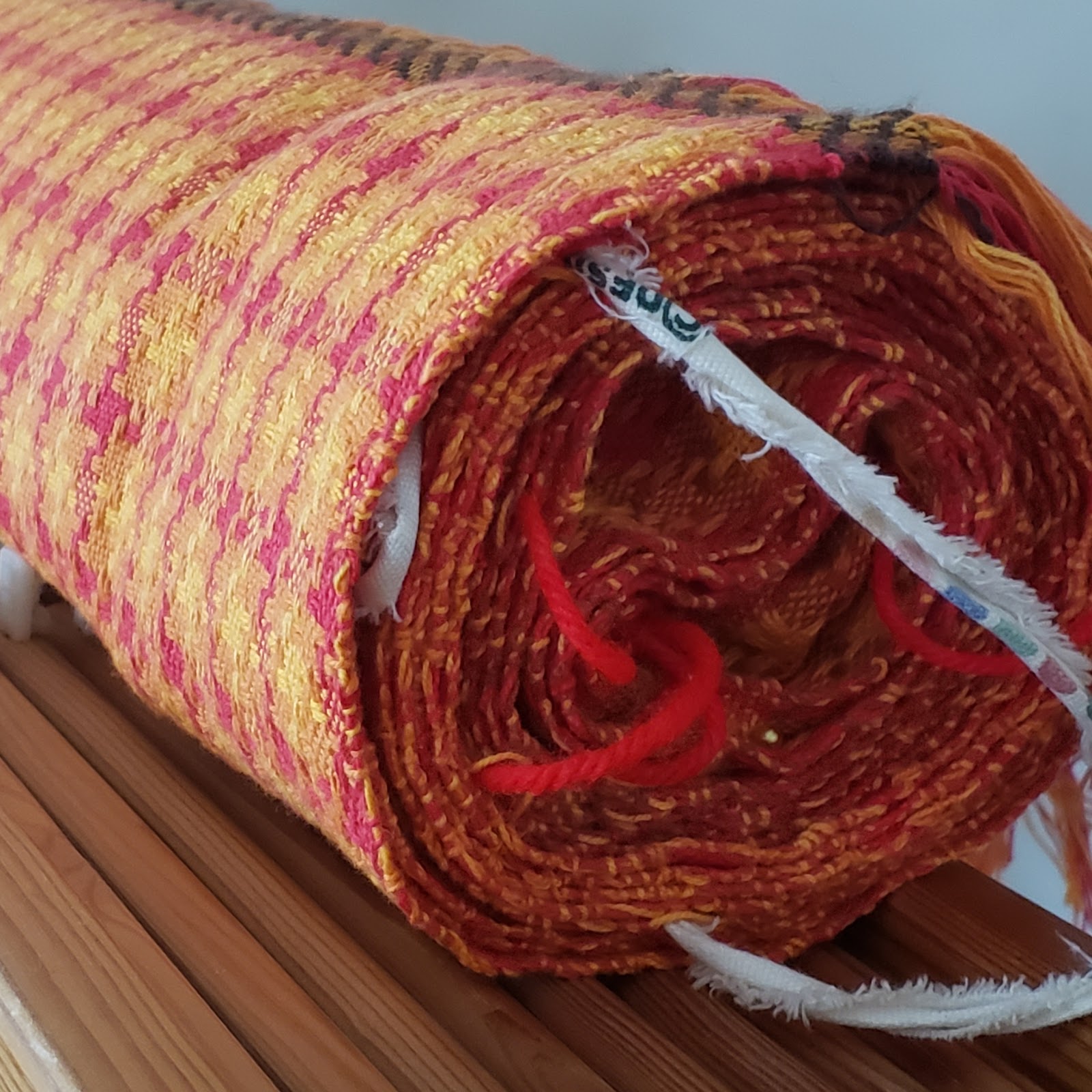 I’m working with a walking foot on my Singer sewing machine because I found that the feed dogs in the plate and the feed dogs in the walking foot move the material evenly through as I’m sewing hems.  I bought this foot a couple of years ago to quilt a top, batting, and bottom of a small quilt and decided to try it for towel hems.  In the past, I would sometimes feel that the hems would slip when I got to the end, leaving a little bit of a tail.  This walking foot combined with even pinning solves the problem completely! 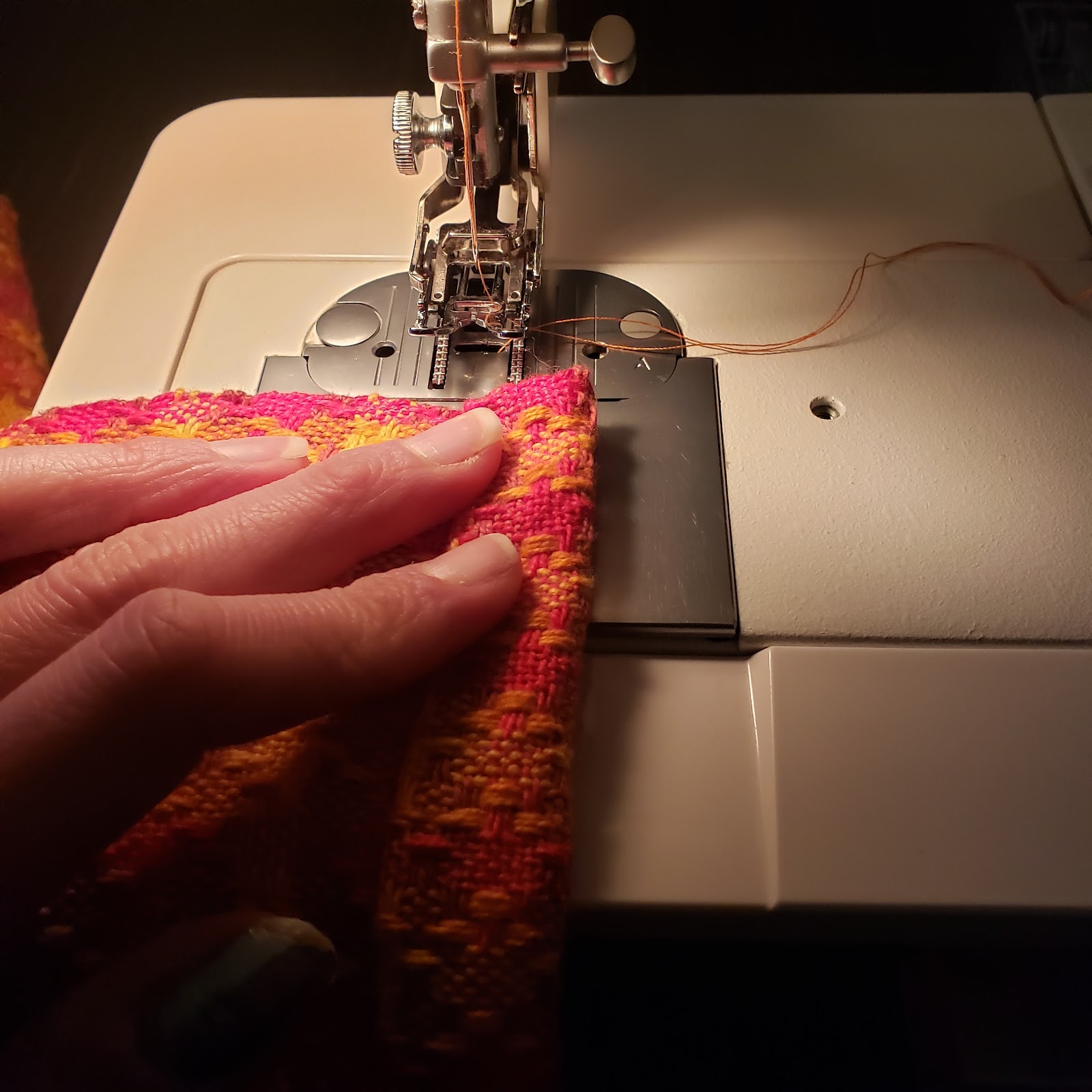 So, if you know me personally, you know that I really don't have an eye for putting color combinations together.  I tend to lean towards repeating what has worked in the past.  This calls for a facetime phone call to a color expert!  I lined up what I thought I wanted to do and we ended up doing a lot of ‘ok...move that one over, move the other one back, go brighter on the blue, where did that other green go, etc.'  This is the final result! 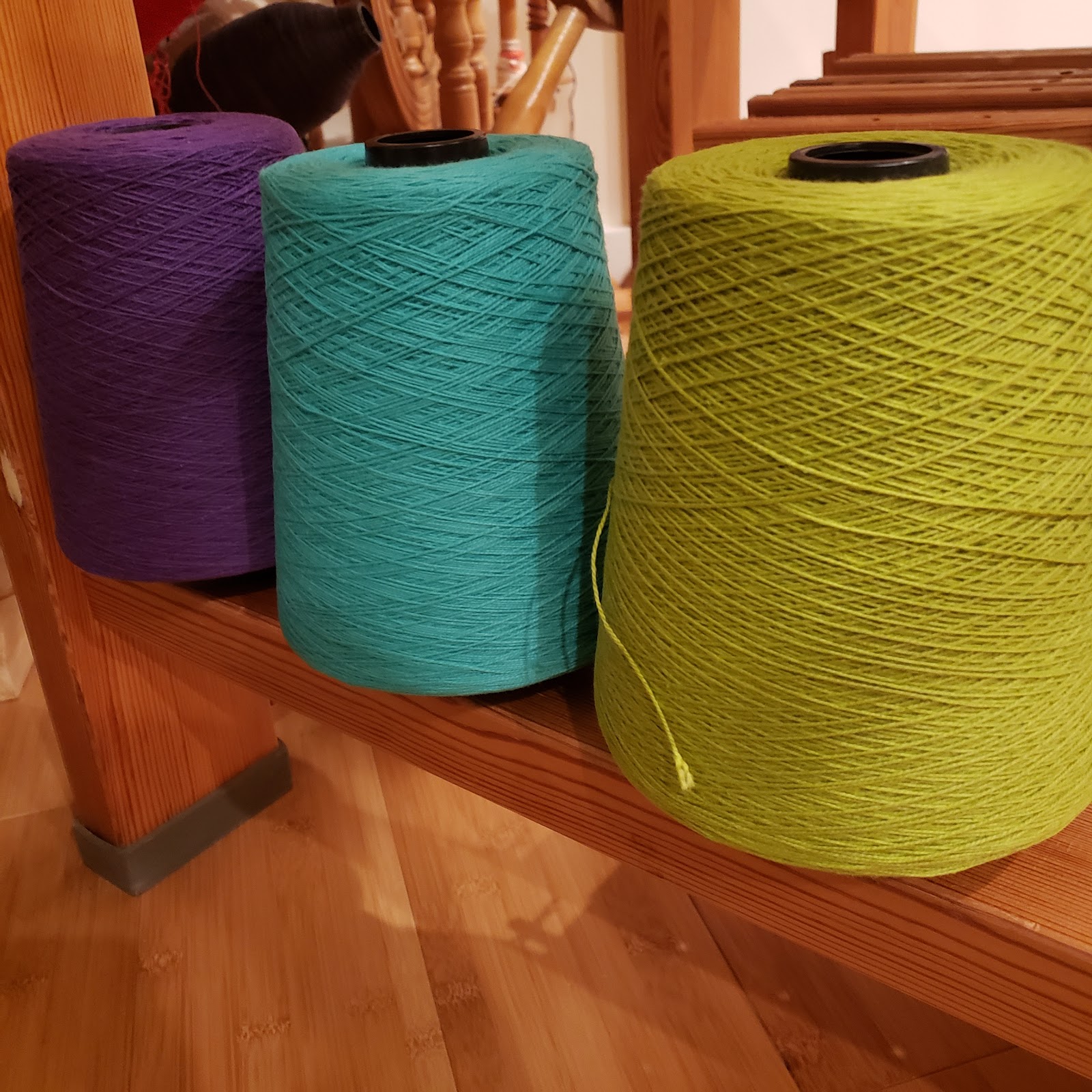 Here we go again with the same pattern!  I wanted to see how the colors would play with each other with the green as the main color and since the treadles were already tied up, why not throw on another run! With one full cone of the green, I knew that I would have enough for 8 complete towels.  No need to supplement with another green at the end. 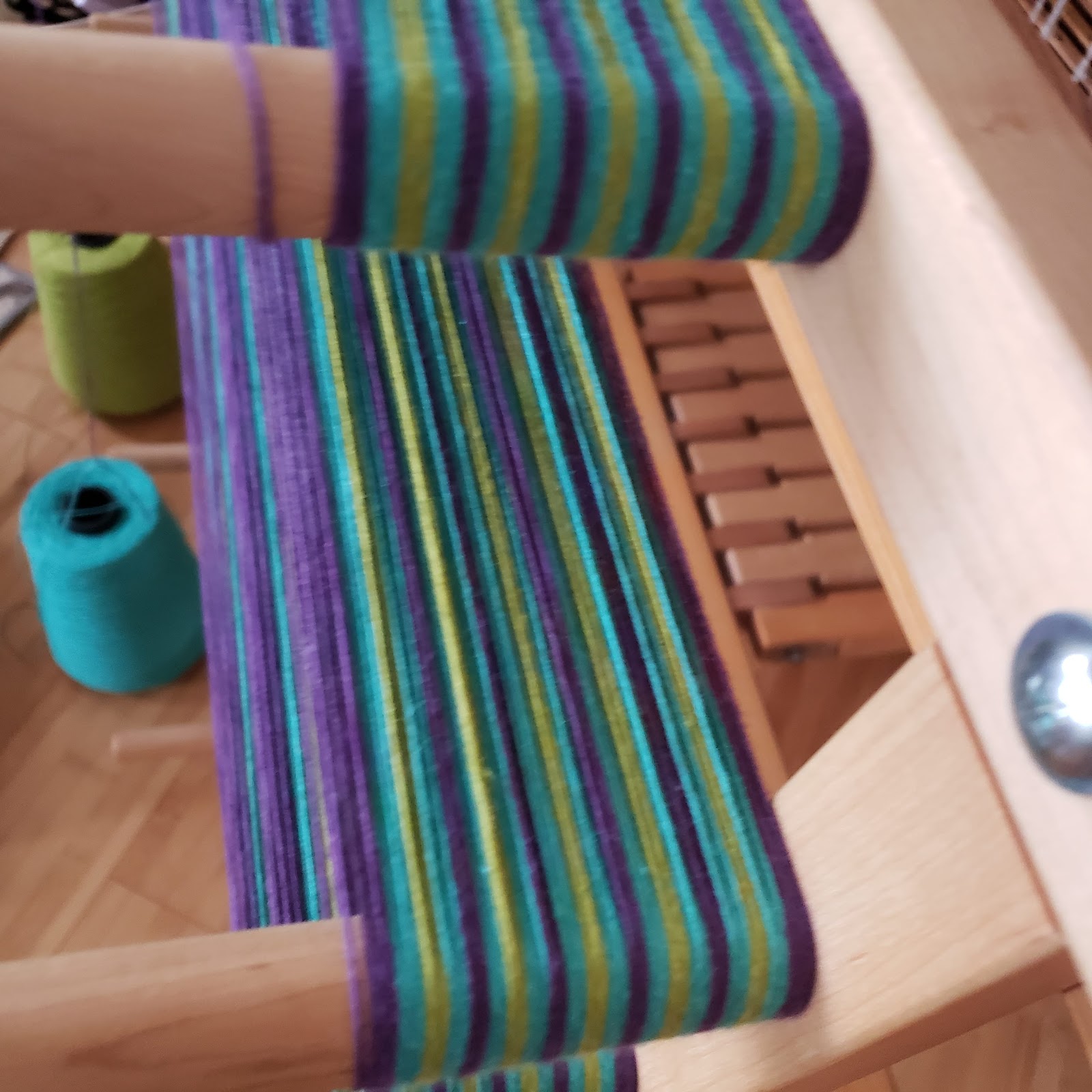 There’s something about the way the sun comes in the house and having a project on the loom!  My love cup is full! :) 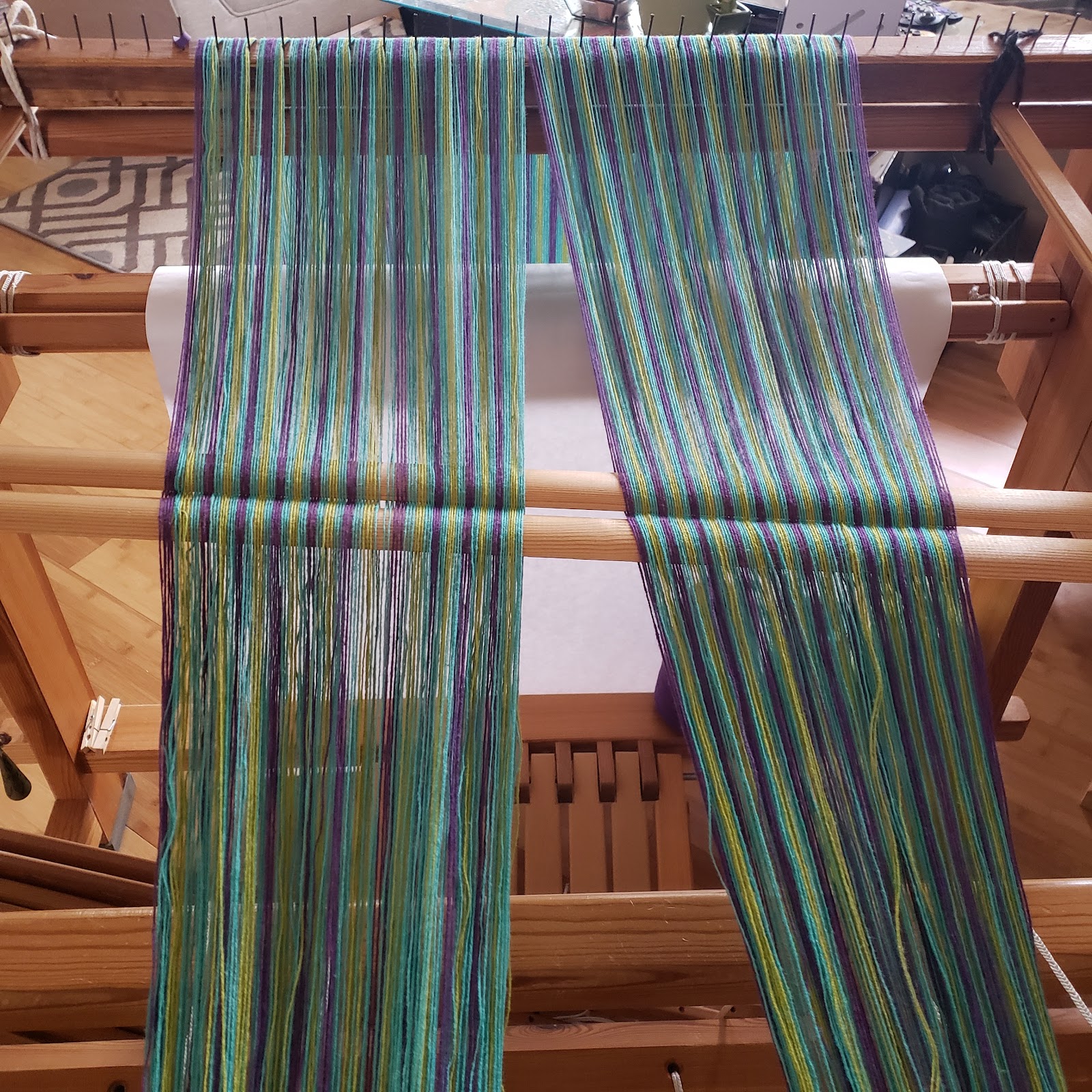 The colors seem to play well together! 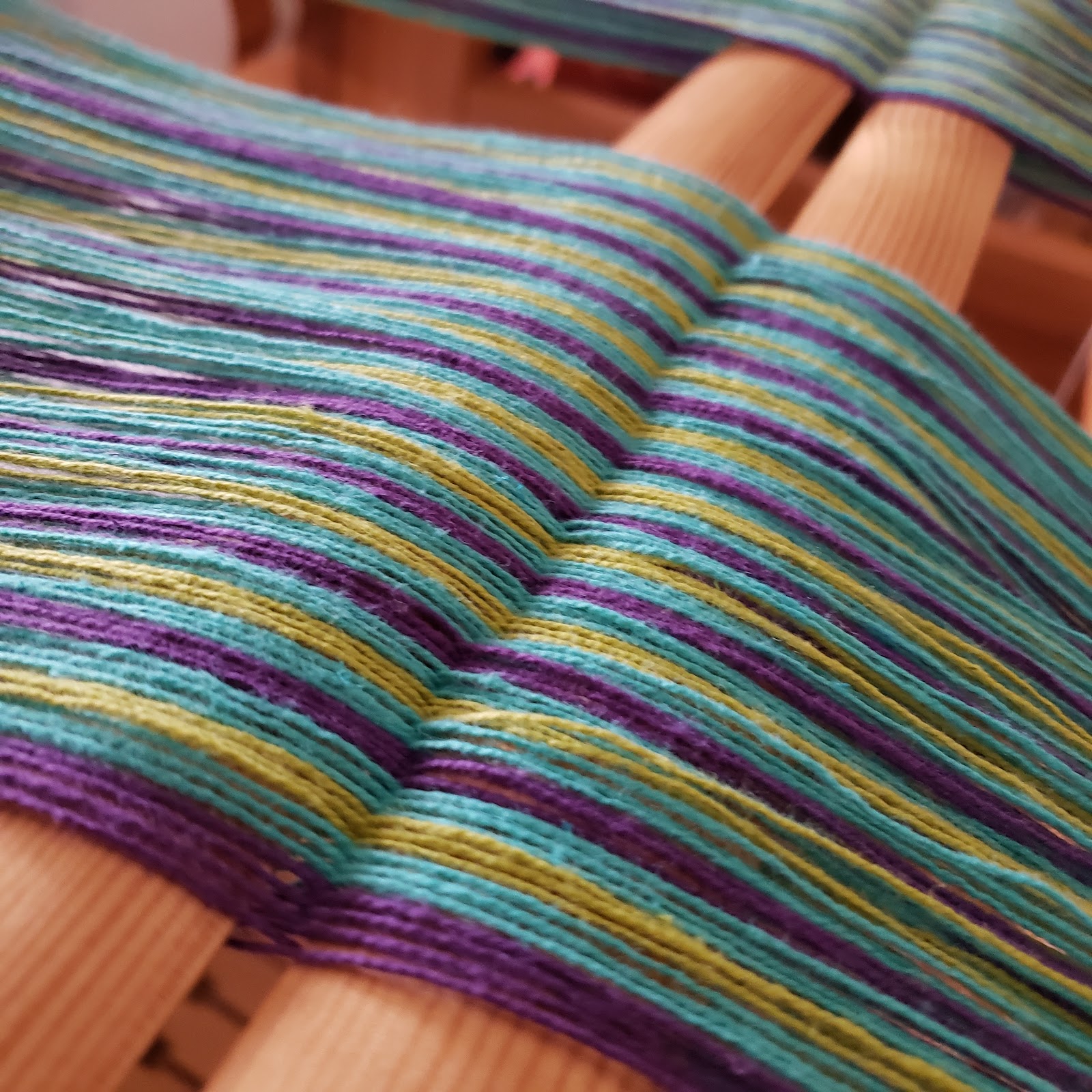 I have been called crazy for this before but threading the heddles is my favorite part!  :) 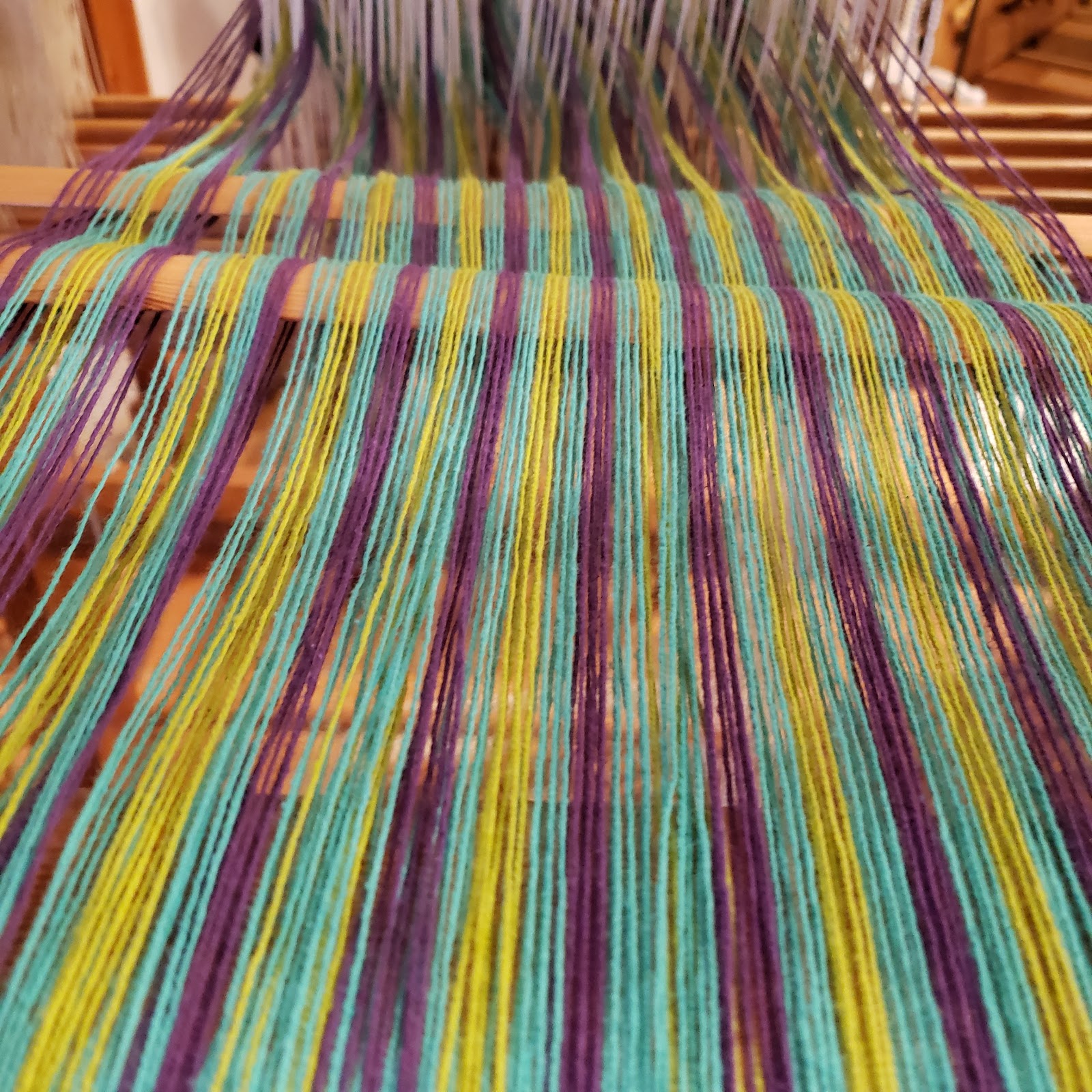 Sleying the reed and so far, it’s been smooth sailing! 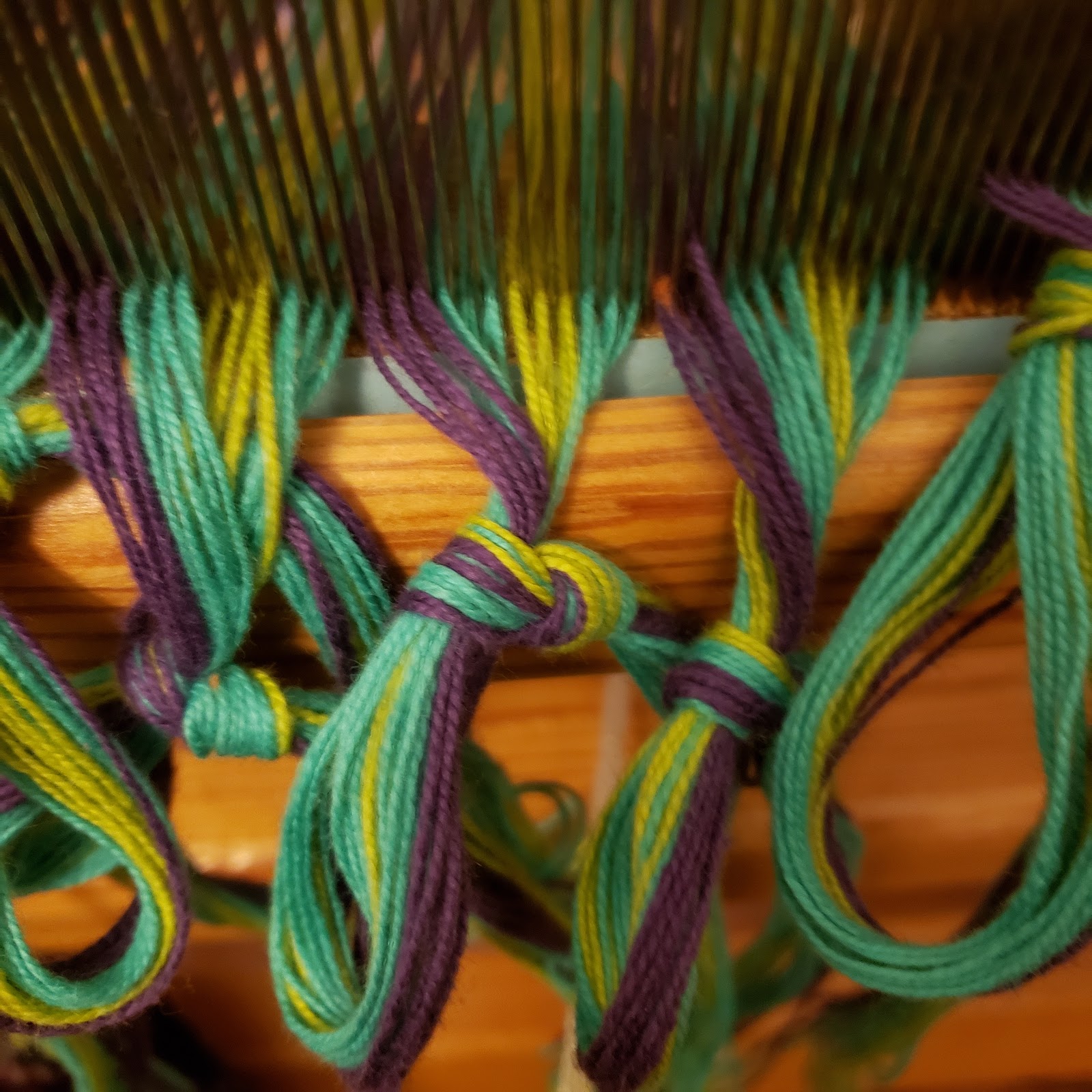 So here we go!  This picture wasn’t taken in natural sunlight so the colors are a little bit muddled but you get the idea! 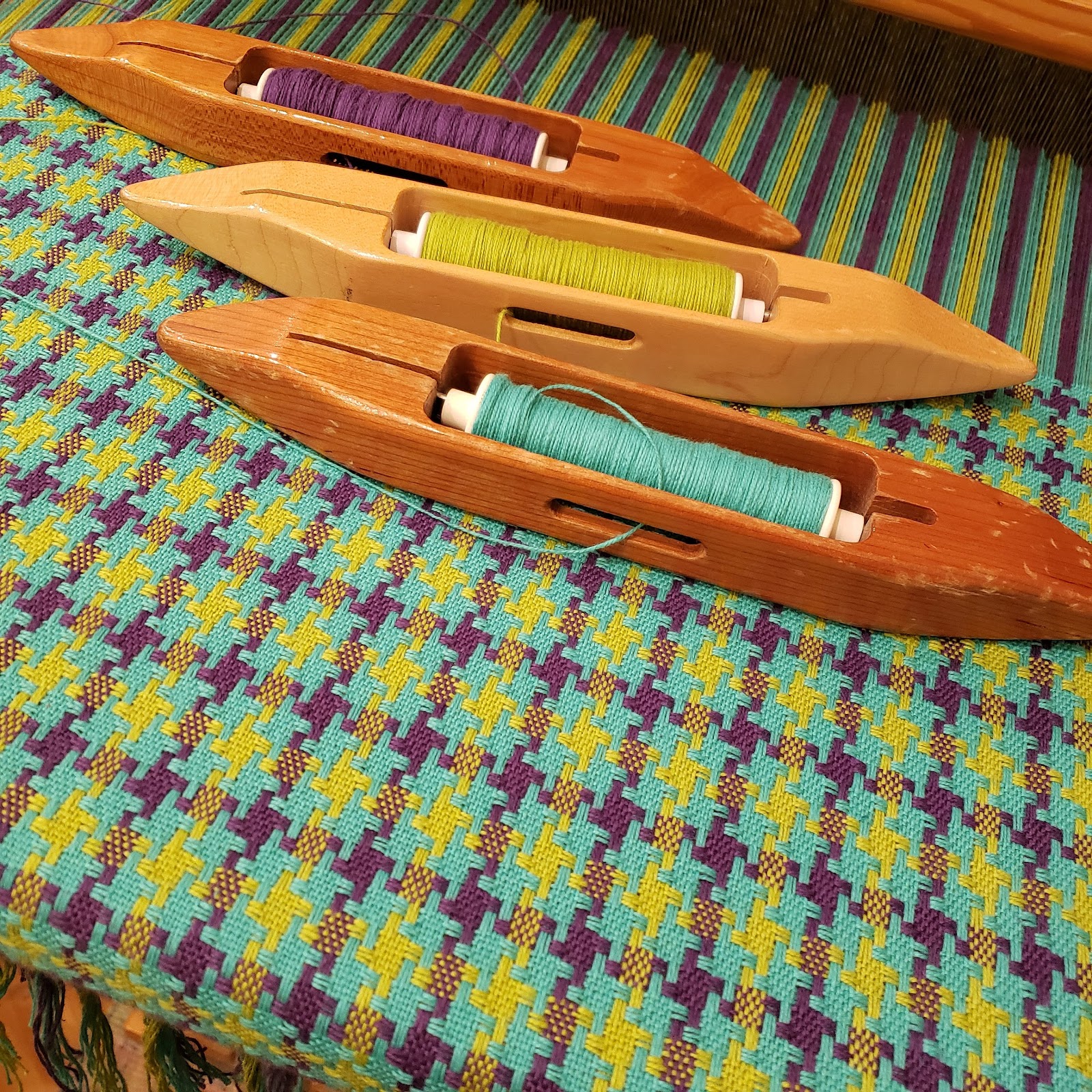 Remember that natural silk huck lace shawl that I made?   I wet finished it and pressed it and it hung on the back of the Megado staring at me whispering “I need something” for quite some time before I decided what to do.  This past summer, I went on a beading binge and remembered some gorgeous turquoise beads that I purchased during a bead sale.  In a rummage of the bead box, I found some absolutely beautiful glass beads I’ve had for next to forever.  There were 40 of those and I knew if I could get them evenly spaced, they were first in line to be used.  Eventually, using safety pins, I was able to find a spacing in the fringe that worked and marked it with safety pins. 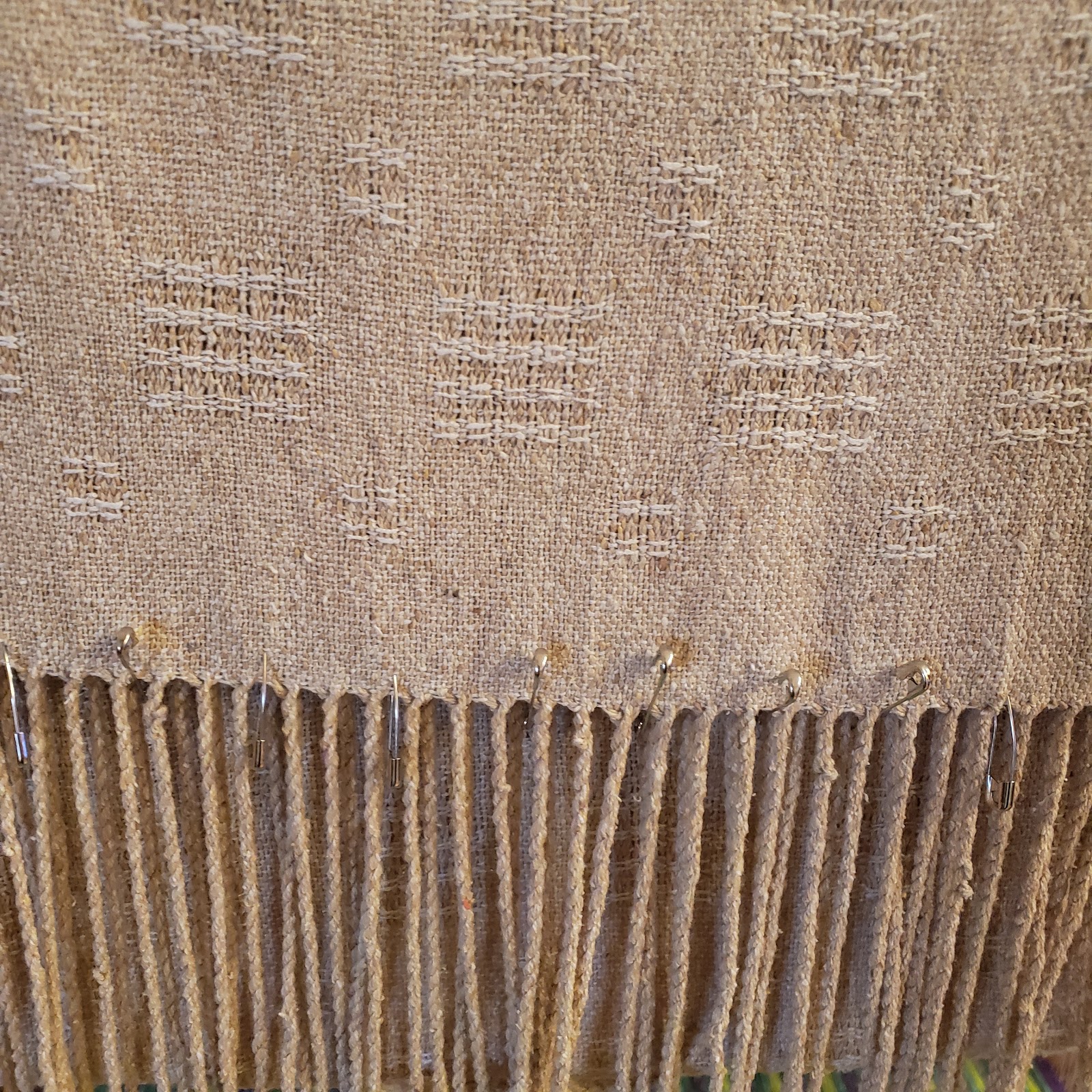 Small turquoise seed bead, followed by a larger silver bead, the glass bead and then back to silver and turquoise was the route I went.  I think it adds a nice bit of weight to the silk and just the right amount (subtle) bling in the fringe.  The only drawback is this is going to take quite some time to finish.  I’m using a beading needle with a double threaded beading thread and doing my absolute best to hide the threads in between each beaded section. 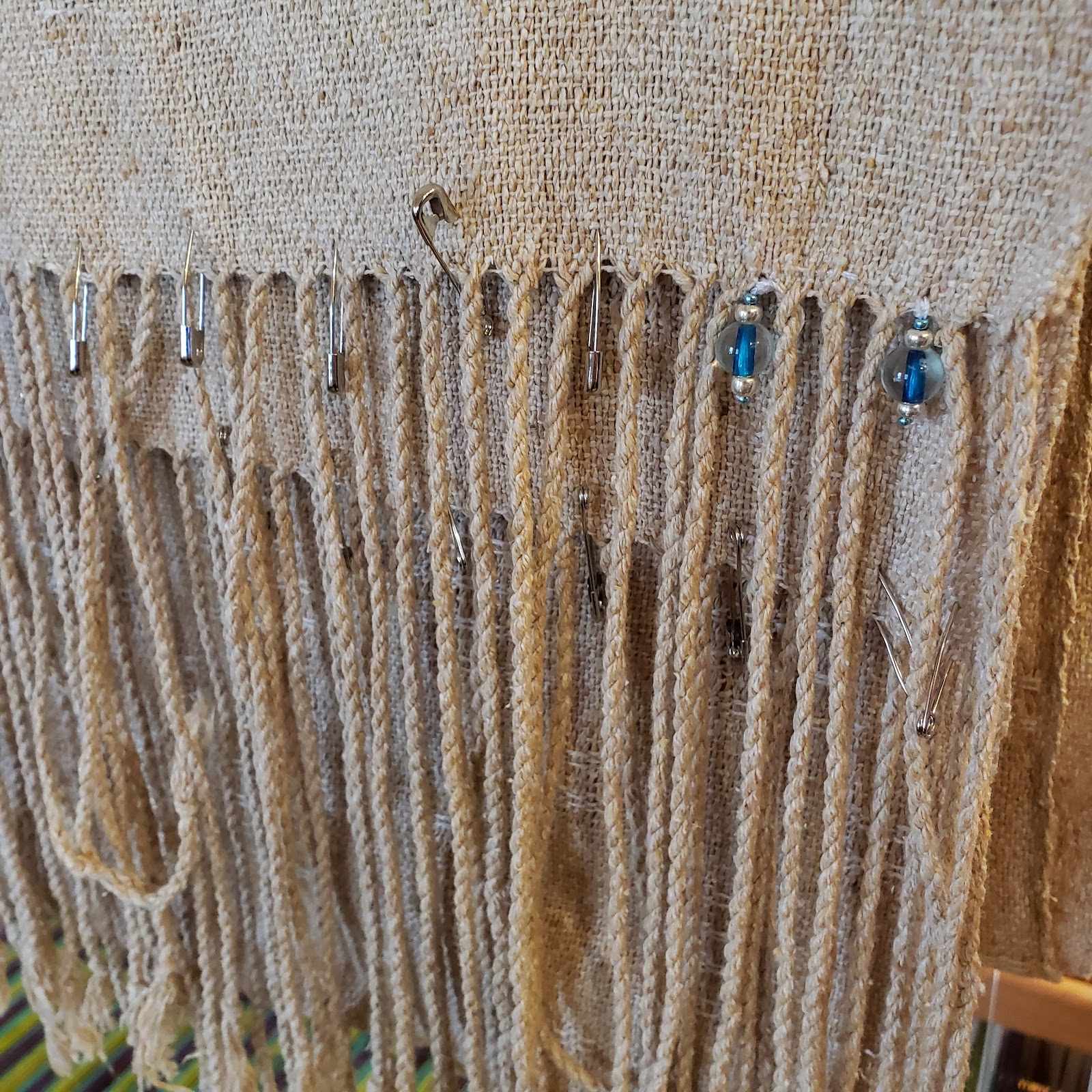 So that’s what’s been going on!  The only drawback to my weaving is that I don’t have enough time to finish projects as quickly as I did during the lockdown.  I have only an hour or so a night after work to plug away at the loom.  Utilizing every opportunity to complete projects has been not only a goal but a challenge!

I live in an area where there are absolutely no guilds.  There are literally no other weavers to communicate with and share ideas with.  I’ve been feeling that because of that, I’m missing out on learning new techniques and trying new things.  Years ago, there were a lot of active groups and it seems that most of them have fallen by the wayside.  I found myself, unsuccessfully, looking at youtube for videos of block weaving and stumbled on an online guild.  I did a little research on how the guild was set up and ended up signing up for a year.  There’s something to be said to surround yourself with creative people, be it online or in person.  I’m a bit introverted so the fact that I don’t have to leave the house to ‘attend guild meetings’ or workshops is right up my alley!  I think this is the kick in the pants I need to start my COE!  I know I’ve been saying it for years but it’s really time to put some type of label on my weaving.  It’s going to take some time to complete all of the requirements but I feel joining a guild and getting insight from other weavers will be one of the best decisions I’ve made in pursuit of pushing my weaving skills to the next level!

Until next time!  ;) Happy weaving!