July 03, 2011
I remember as a kid looking through the Sears catalog and paying particular attention to the toy section. Carefully going over each item with interest.....not necessarily wanting things.....just observing them. I get that same feeling now as an adult. Looking at yarn, loom, and equipment catalogs both online and paper. Sometimes there is a need for research but for the most part, the specs on looms just turns into information stored for a later date and yarns.....well.....I have enough of that! :) Just eye candy!
In my search for a used Louet Spring, I found that I was most interested in the countermarche action due to my jack loom not being able to accommodate rep weave. The more research I did, the more I found that perhaps I should be looking for a Glimakra. Swinging beater, ability of adding a draw loom in the future, and HEAVY duty! So....the search began. I came across several for sale within a days drive. One in particular, near Pittsburgh, seemed like the best deal. It was newer and the floor model from a store........never used! The only problem that I could foresee was that it was 32" and not the 39" needed to accommodate a draw loom. I have no idea how to work a draw loom but know without a shadow of a doubt that one day I'll learn. Oh well. So.....I emailed her and picked up the loom! Hooray!!! Come to find out....the loom is a 6 harness and not 4! That was the first suprise! The second suprise came when I put it together, with Jeremiah's help (thank God for Jeremiah.....I couldn't have done it alone!) and found out that it is indeed 100cm!!!!!!!! 39"!!!!! I can (one day) attach a draw loom!!!!!! I cried a little........so happy!!!!!!
Jeremiah washed down the loom before putting it together. The hired help:) 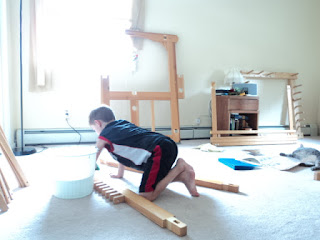 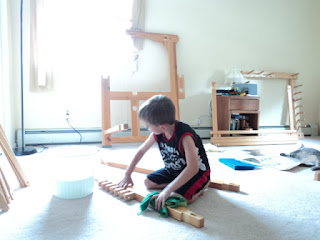 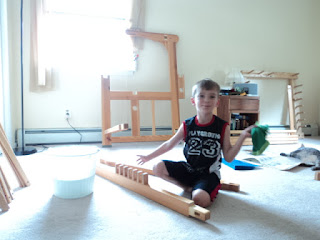 Names are important. I've named things that have turned around and bit me in the tush:) So, I let Jeremiah name this one! He's such a good little helper:).......I added to it just a little. So without further ado.......here she is 'Vav: The Pirate Ship' *what a name!* 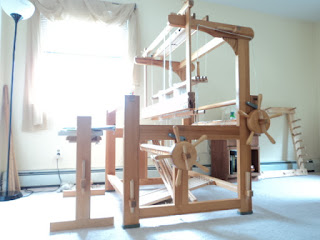 Ain't she a beaut?!
*just found that 'ain't' is a word my spell check recognizes! Wow! I really do learn something new every day!*
At the beginning of the school year I promised Jeremiah that he could have whatever he wanted if he was a good boy at school. There were some problems at the time due to the issues going on at home........he seems to work better with a reward system:) Know what he picks? ..........sigh..........
"A kitten! And I want his name to be Jumper. And I want him to be a boy. And I want him to not have any claws"
.............sigh................
Guess who had not even one small incident for the rest of the school? Yep.
About a week before school ended I could just see it.....we would have to go to the Humane Society and get a kitten................I think they come to you.......right? Yeah.....that's what I told him! The kitten will have to come to us. We are NOT going to go out and get one. One that needs a home bad enough will find us.
Jeremiah finished school on Friday. Saturday we were at our annual yard sale..........and we hear a scratchy meow. Jumpur found us. I swear you can't make this stuff up! Lol! The kitten was on it's last leg. We took her home then quickly to the vet. She has everything but lukemia:( BUT everything is treatable and according to the vet, if this kitten had not claimed Jeremiah, she would have never made it. So.......here she is......Jumpur......who is a girl.....who has claws.....who loves Jeremiah! 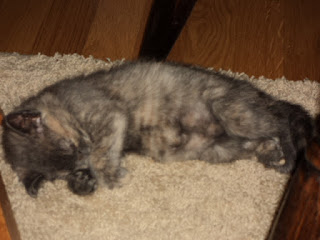 Here is her sleepy self!
She's so sweet and tiny and is getting better by leaps and bounds. She sits on the back of Jeremiah's remote control trucks and rides them around the living room.........and chases the matchbox cars down the hall!

Susan said…
That was super news about the loom's width! You have a very handsome helper there...

Your new kitty is a sweetie as well and I hope she is well soon.

Its also great that you are posting again.... missed your enthusiasm!

Restless Knitter said…
I love that the kitten rides in his remote control trucks!
July 7, 2011 at 2:43 PM

Sherri Woodard Coffey said…
. Well, I'm late to the party. Loved reading about the new addions to your household. Didn't see anything more about the loom or kitty. I need "the rest of the story!"
September 30, 2011 at 11:42 PM