February 25, 2011
To take a break from towels (temporarily) I've decided to weave some scarves and revisit some patterns. I dug through my list looking for something classy. Something with style and personality! I had my heart set on the diamonds scarf that I wove on the Megado for a bookmark exchange then rewove using 8/2 tencel a couple of years ago. Then I did a Shannon classic........I knew how many ends and yardage I needed and knew that I had the right color........but was there going to be enough?! Yep....I eyeballed it! I tried hanging sheet rock at the old house once and 'eyeballed it'. You would think I would have learned by the fruit of that project that measuring once and cutting twice was the better option. I had a good inch and a half gap!!! Lots and lots of unnecessary spackeling! So there I sat on the studio floor Indian style 'eyeballing' the cone of black yarn. Honestly it would have taken merely minutes to walk over to the closet and pull out an empty cone, tare the scale, and do some simple math but no.......I starred and starred and starred. Turning the cone over and looking at it intently thinking "If I do it, there won't be enough. If I don't there will" <--I know....makes a whole lot of sense:) So......off to winding the warp I went. And you've guessed it! I was short by 30 ends! Now what?! I chained the warp off of the board and set it up to be beamed on the back beam. 160 ends.......alone with no purpose. I would have to fiddle with the pattern to see if I could make it work. So there it sat for a good couple of days........
I think like most weavers I tend to think about weaving, patterns, yarn (
oooooh yarn), looms, and spinning most of the time. Constantly thinking of the next project, pattern, or color choices......or next piece of equipment:D I pondered the pattern in my mind for the black warp sitting on the back beam of the loom. I knew that if I modified the pattern from the original idea, I would not be doing the pattern justice and should probably just look for something using less threads in a pattern repeat. I dug out The Best of Weaver's Twill Thrills by Interweave. How could I go wrong! It was only a couple of minutes and I found something that would work perfect with 160 ends!!!!! Hooray!!! A huge sigh of relief! HUGE! :) So, here is the next project. Scarves! Three, in fact.....one red, one purple, and one in gold :) Thank God for Interweave Press! 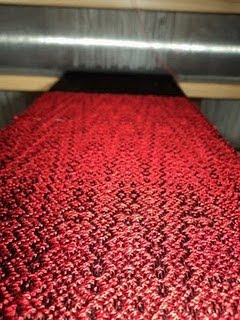 Susan Harvey said…
This pattern reminds me of an advancing network twill I did for a shawl commission!
Naturally I like it :)