October 27, 2009
Ursula and I popped out to the Rhinebeck Sheep and Wool Festival this year on a Sunday............let me tell you how a Sunday with some rain was so much better than a beautiful sunny Saturday!!! We were able to walk just about everywhere with ease:) The place was still mobbed but, all in all it was very comfortable. About 3 or 4 years ago we brought Ursula's son with us and it was hard for the poor little guy because how interested is a 6 year old going to be in yarn and fiber stuff? Well, this year we brought him again as well as his brand new little brother and they were the best two kids on the planet for the entire day!!! ;) I was one happy Aunt, let me tell you!!!! ;) My friend Will also came down from Ithica to check it out. He's been spinning his cats fur into yarn............when he told me and I didn't react as others had, I think he was a little shocked:) I was so glad he got to make the treck out and enjoy the day:)
I picked up a Cricket Loom to bring home to show my beginners weaving class how a basic loom works. I'm teaching 3rd grade through JV basic weaving on pot holder looms......just so they can see how fabric is created. They are soooooo cool to watch:) Some of the kids get it right away and just take off and others have little to no interest at all. With a table of 6 kids, I had only one that had no interest..................not too bad, if you ask me;) The only problem with the Cricket Loom was that when I opened the box to assemble it, there was no hardware! Pooh! I wrote to Schacht and they graciously sent me the needed parts!!! What a fabulous company!!! My assumption is that the loom was previously assembled and then placed back into the box without the hardware. Thank you to Schacht Spindle Company for being so darn cool about that!!!
Yesterday I spent the day in the studio organizing and getting ready for some new warps. I dressed the Cricket and started weaving a fun scarf using cotton and eyelash yarn. :) Here is a picture. 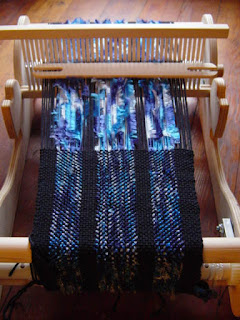 I have a little work to do on the selvages but, I'm amazed at how much I'm enjoying weaving on this little guy:)
Finally, this is a shot of towels I'm working on for my little sister. Her theme is blue, orange, and white as her and her husband are huge Gator fans........and super silly:) I recently wove her a scarf with orange and blue..........she gets like a little kid..........claps and jumps up and down......and I'm sure wears the scarf every day:) 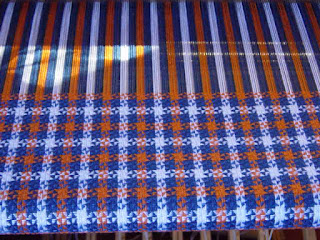 Well, I'm off to wind some warps for some orders:) Until next time!!!