February 04, 2009
I started the star scarves and have been pretty happy with the way they are turning out because they resemble exactly what I designed when I designed them:) Always a plus! I ended up changing from a solid grey warp to an alternating grey and white warp. There will be a total of 4 scarves roughly 73" long with 10" fringe at either end. My original colors were purple, blue, black, and white but, since I am using the white in the warp, I may go with a nice lime green for fun! I thought that would be a little unique:) 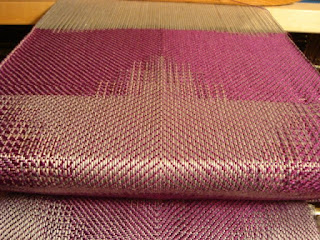 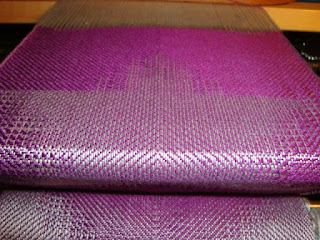 Here are two shots of the scarf with the bottom picture being the closest to the true colors.
So.......what to do with Diana.......well, I'm giving her a fair chance but, about an hour into weaving again last night she started acting up. I'm trying to be fair and work on getting her fixed. Since the other cord broke (and I'm a very light steady weaver......I'm not weaving rugs) this is her second strike. I was hoping to keep her in the studio but, quite frankly, I get sick to my stomach when she acts up......and I just want to weave. I'm taking some video of the hammer/knife action today to send in to see if they can figure out what is wrong with her. I'm beyond thankful that I have another piece of equipment that I can work with ...... I'm doing cartwheels in anticipation!!!

Lynnette said…
It is hard when your equipment gives you grief. I had a huge countermarche loom that never did what I wanted and I know your pain. Can't wait to see the Lime Scarf!
February 5, 2009 at 1:56 PM