December 29, 2008
I hope you all had a fabulous Christmas!!!! It took Jeremiah three days to get through all of his presents! We had to open each one and then take it out of the box and play with it. :) One lesson I did learn this year was that he would have been fine with two or three fun toys instead of the ten that he did get from us. It was so easy to over do it and I think we would have been fine if only one of us shopped but, we went separately and on different days.......phew! Not to mention, the Grand parents all showered him with gifts too!!!
Here is a picture of Jeremiah with his cousin Jada at Iggy (what he calls his Grandmother.....and no one can figure out why!) and Pop's house on Christmas Eve opening presents. They were so much fun to watch and I was impressed that they were both so well behaved. :) 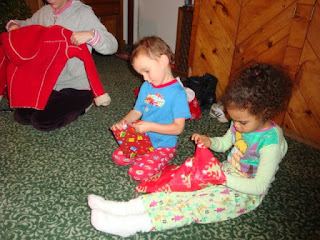 In other spinning/weaving news, I have been renewing items on Etsy instead of listing new items because we have been so busy with the hustle and bustle of Christmas, I haven't been able to spin or weave much. So, a new fresh start is on the way. Since there are currently two loom in the studio, I'm thinking that I may sell my 60" Nilus and look for something a tad smaller, perhaps 36" - 42" just to loosen up a little room in here. I have found that I'm not using the full 60". A matter of fact, the most I've used is around 36" for a baby blanket years ago. I did find a loom for sale local (I'll elaborate more once it's here....if I get it) that I think will be perfect;)
Well, I'm off to tend the tot and doggie.......I'm sure they are up to no good by now;)

Alpaca Granny said…
Yep, Christmas is all about the kids. The grandgirls are coming today for our present opening. Big smiles for me.
Maple
December 29, 2008 at 1:06 PM

skiingweaver said…
What a sweet little man! I *love* that it took him days to open all his presents because he wanted to play with them as he went. :) Sounds like you had a lovely Christmas, surrounded by family, hooray!