December 31, 2008
Last night the unthinkable happened. It was a little after midnight and I was diligently working on the first of my new series in organics. I'm taking organic materials and using them to design fabric. In this case, it was the leaves draft. I had created the draft from the original tracing and was not 100% happy with it so, I was modifying it to were I was happy with it. I knew that the fabric itself would not look like leaves but, it was very important to have the draft look like or at least resemble one side from the center out of a leaf. So hours of work ..... I mean hours here ...... so much that I was up that late with my eyes burning and singing because it was just beautiful. Yes!!! The first in the organics series was going to be the most beautiful! I think it was when I said, "Perfecto!!!" and clapped my hands like a maniac that my computer decided that it doesn't like Fiberworks and closed the program. Yep. It was a long night last night. 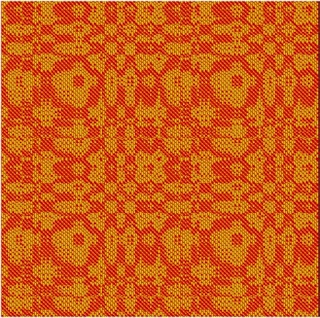 Alison said…
How frustrating! It drives me nuts how much I depend on my computer. In most ways, it makes life so much easier, but one glitch can throw the whole day out of whack!
December 31, 2008 at 12:58 PM

skiingweaver said…
Oh my god, you poor thing, after all that work. Ahhhh! (Happily, when my darling son poured an ENTIRE MUG of coffee over my old laptop, the hard drive was salvageable, lol!)
December 31, 2008 at 3:03 PM

bspinner said…
Some times I think we depend on our computers to much but on the other hand what would we do without them these days? I love weaving programs. Som much easier then the old hand draw downs on graph papger.
I love the colors you've chosen on this first piece.
January 1, 2009 at 9:09 AM