November 20, 2008
I've been trying to think of my next project and what theme I would like to go with. Since I'm most inspired by the things I see in nature I figured that the theme should be 'organics'. Not only does that sound 'cool' (lol....it's the 'in' thing.) but, it would be nice and easy to just hop on outside and get some leaves, right? No. Not for me. It seems each time I think of it, instead of getting up, going outside, and picking up a couple of leaves, I either forget or am too comfortable sitting in front of the wood stove playing Thomas the Tank Engine (better known as playing tracks) with my son. Besides, it's cold out there!!! This has been a battle going on in my mind for almost a week! Well, today there was victory!!! I found the perfect time to get some leaves. A quiet house and the daunting project of altering a shirt (football jersey no less) for a brother of a friend staring me in the face. I thought, "I really should go get some leaves right now!" and that's just what I did. I walked into the upstairs playroom, opened the window, leaned out and sorted through some of the leaves that blew up against the house. First, it's a good thing my house has two stories both on ground level, they are sort of next to each other (both levels) and the house was built into the side of a hill. Second, it's a good thing no one saw me because I teetered there and couldn't stop laughing. Third, I could have simply used the convenience of the door. *sigh* Well, here are the leaves and a rough draft of the network draft. 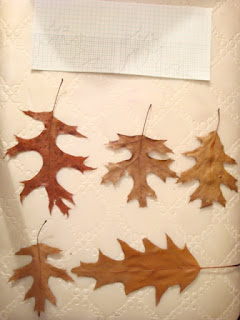 By tracing one side of two of the leaves, I came up with the rough draft on the graph paper above it. Since some of the lines back track, I will have to edit and modify the lines so that I can create a pattern that can be woven. I'm thinking that I may do several of either one or both to see which works better.